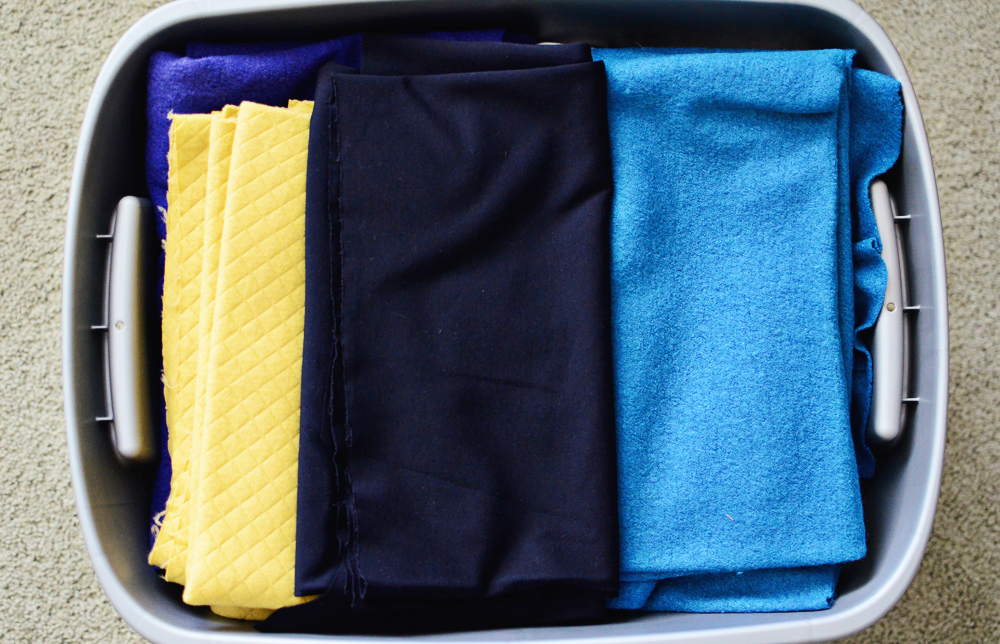 It is a bright and shiny new 2017 everyone! I do love this time of year for that wiped slate clean sort of feeling, though it does tend to wear off rather too quickly. I’m not partial to making lots of resolutions as I’ve found that I never make good on them. One or two goals for the new year is good for me. An old goal that I’ve always had is to sew all the fabric. Or at the very least, to sew all of my fabric. More often than not, the accruing/hoarding part of my #fabricjunkie personality takes over and the sewing part gets tossed to the wayside. This year I decided to take more logical steps in trying to sew all the fabric. I mean, there’s saying that I’m going to sew all the fabric and then there’s actually making plans, laying groundwork and forming a foundation from which to accomplish a goal. While I know I won’t be able to sew all of my fabric in one year, I can at least make a concerted effort to sew more of my stash than usual.

To start, I thought I would share a project that I undertook as my first official stashbusting step. Making a Swatch Journal. This was a tall order. I have a lot more fabric than even I realized. There were so many pieces that I forgot I had and some that I have no idea where they even came from. In fact, going through all of it gave me some much needed perspective. It is time to get some sew on. 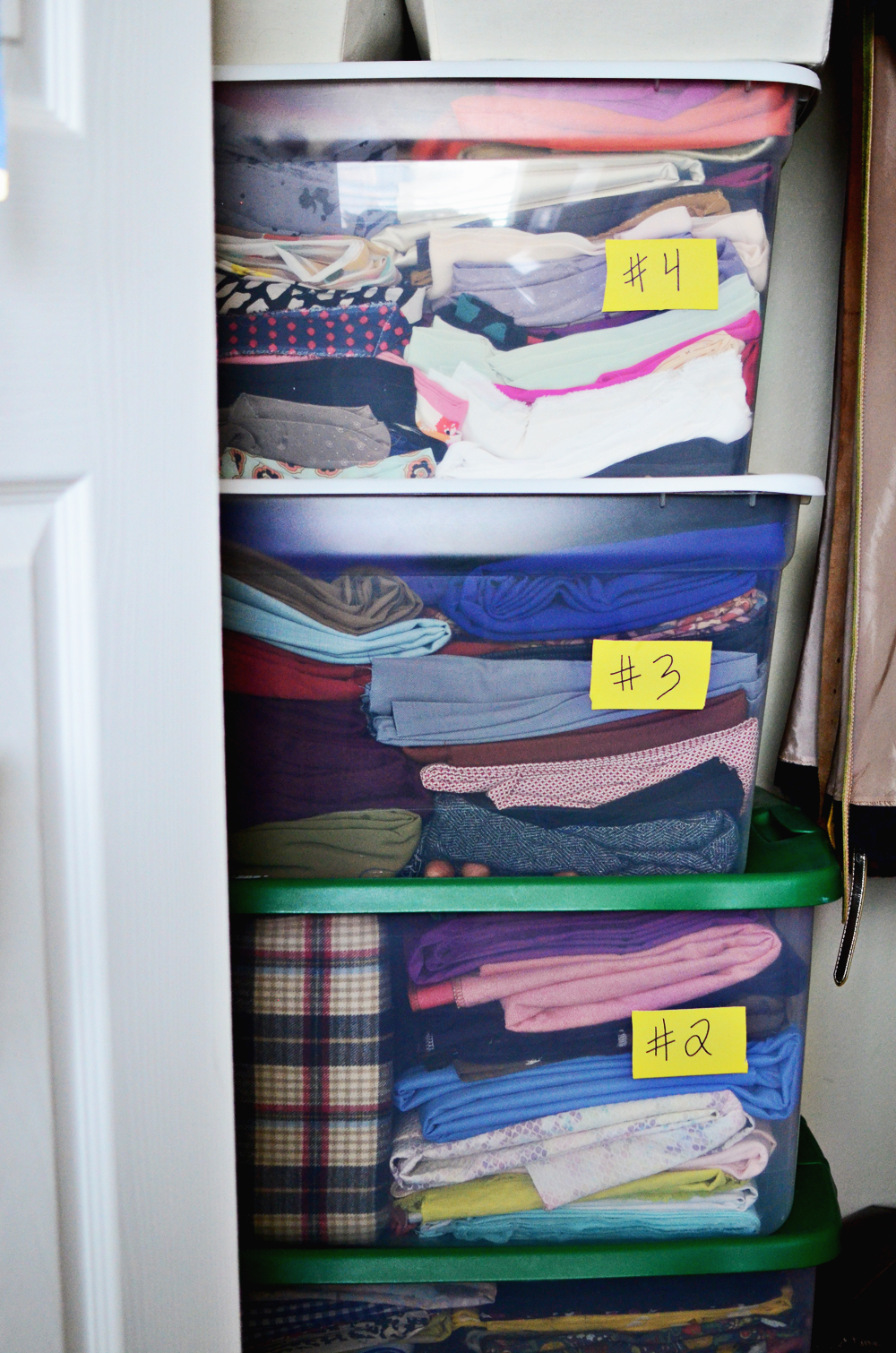 I decided to overhaul my fabric stashing process by putting like fabrics with like fabrics. For the most part, this was already done because I tend to do this anyway, but there were several stacks that needed to be reorganized. As much as I could, I put all the wools with wools, the silks with silks, etc. From there, I also tried to organize by sub-type, for example, Double Knits, Wool Suitings, Cotton Shirtings, Cotton Mid and Bottom Weights, etc. I felt that as far as wardrobing was concerned, aka matching up different types of fabrics with clothes already in existence in my wardrobe, this would fare better and be easier to coordinate when flipping through my swatch journal. So, to sum up, I put all the like fabrics with like fabrics in tubs and there ended up being 18 of those. #fabricjunkieshame 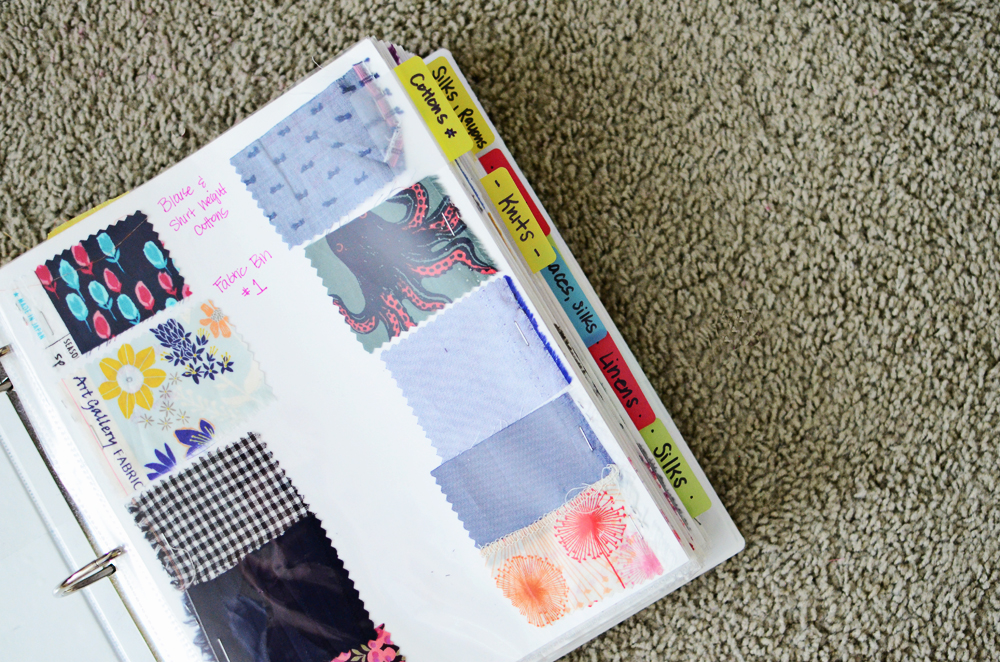 While I was doing this, I clipped a swatch from each and every fabric piece, stapled that to a page of cardstock and wrote how much yardage I have x the width. For every cardstock swatch set within a tub, I’ve labeled the bin accordingly – just with a number, mind you – but this makes it so much easier when it’s time to go dig out that fabric in future. One thing that has long been a problem with my productivity is that I tend to drag out all sorts of fabrics from all sorts of bins and from there just keep it around the sewing room. This takes up a ton of room after so much of this behavior. Once this starts getting to a critical point, I loose interest in any process of sewing because I can’t see the forest for the trees and then something like a couple of weeks will go by where I just don’t have it in me to clean up and keep going on with what was already on the sewing table. So then when I finally get up the gumption to clean my sewing room, I end up discarding ideas and starting all over again with new ones. It ends up being quite time consuming and I felt like this idea of keeping a swatch journal would really cut down on the need to drag out the fabrics in the first place. 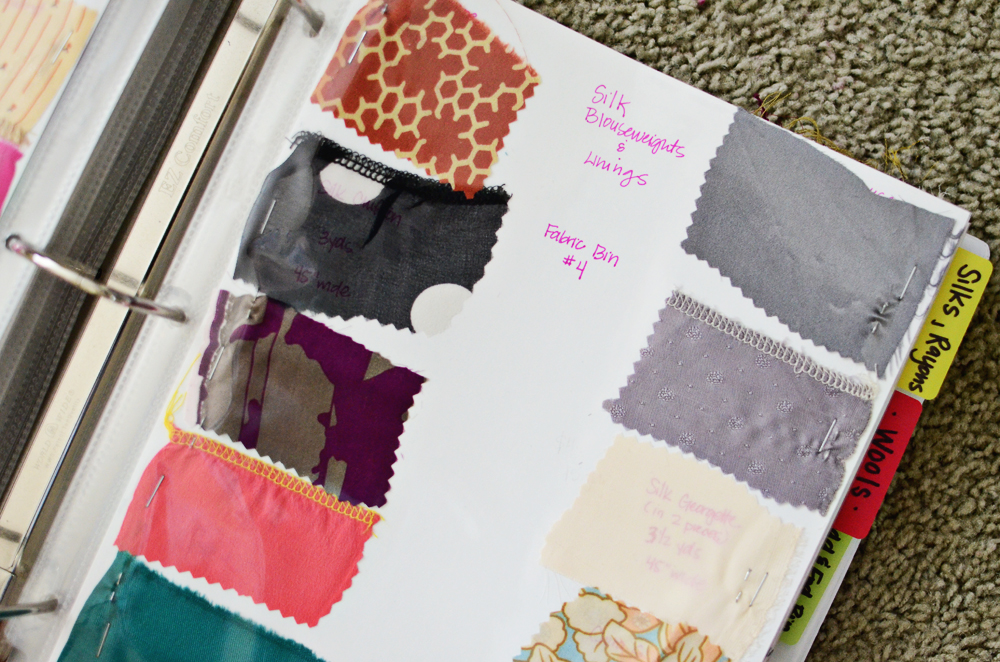 After completing the swatch pages, I put the pages in page protectors and then filed them in a big binder – The Swatch Journal. Once all the bins were gone through and organized, I organized all the swatch pages by fiber type and tabbed them so that they were easier to flip through. I have Cottons, Silks, Laces, Rayons, Wools and Linens. While on a somewhat small scale, I’ve found that this has already proved pretty useful. My first sewing project of the year called for some contrast fabric for sleeve plackets and cuffs. Flipping through the Swatch Journal made it so much easier to see what fabrics I have, how much I have and if it would work for the project at hand. I’m excited to utilize this tool this year. I’m hoping for results. 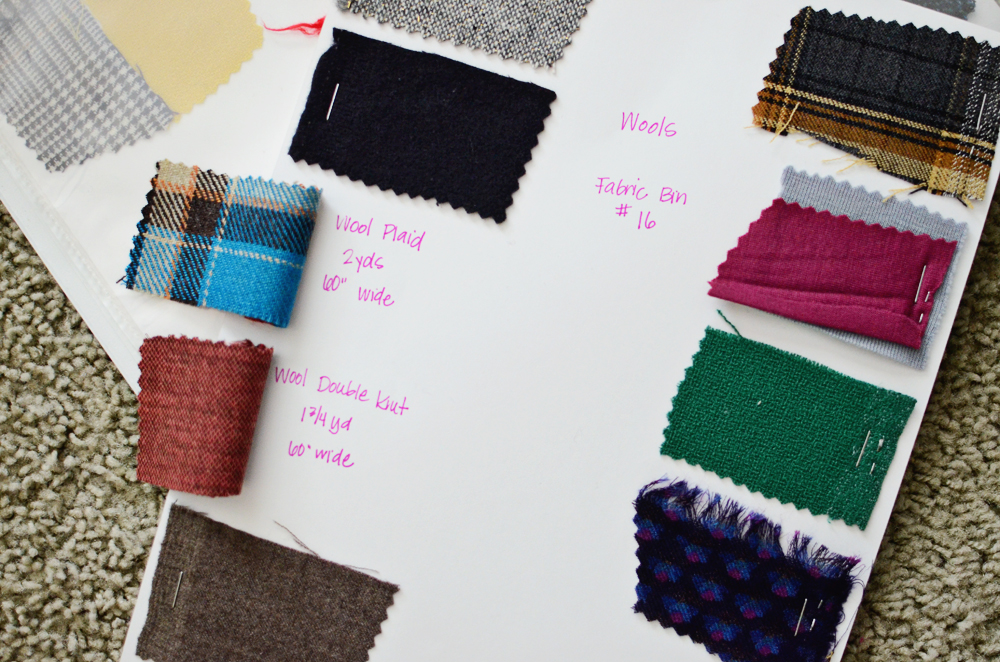 I’m sure many of you have similar methods for keeping a stash. I would love to hear about them! What do you do with all of your fabrics? How do you think about using them? Do you have a method for organizing all of them?